In February 2018, Mayank Agarwal, a 42-year-old bank worker from Lucknow’s Rajajipuram, had taken his elderly parents to Varanasi. They had hoped for darshan at the Kashi Vishwanath temple on February 13, on the occasion of Mahashivratri. However, despite reaching Varanasi a day early and leaving for the temple at 6 am, Agarwal found it impossible to fulfil his parents’ wishes. All the roads leading to the temple were packed with devotees. “It was not possible for my parents, who are over 70, to brave the crowds for too long. There were also problems because of the lack of toilets and other facilities. After spending some time trying to make our way to the temple, we went to Maidagin chowk, and did darshan of Baba Vishwanath on the LED screen there.”

In February 2018, Mayank Agarwal, a 42-year-old bank worker from Lucknow’s Rajajipuram, had taken his elderly parents to Varanasi. They had hoped for darshan at the Kashi Vishwanath temple on February 13, on the occasion of Mahashivratri. However, despite reaching Varanasi a day early and leaving for the temple at 6 am, Agarwal found it impossible to fulfil his parents’ wishes. All the roads leading to the temple were packed with devotees. “It was not possible for my parents, who are over 70, to brave the crowds for too long. There were also problems because of the lack of toilets and other facilities. After spending some time trying to make our way to the temple, we went to Maidagin chowk, and did darshan of Baba Vishwanath on the LED screen there.”

Many devotees tell similar stories, of being unable to visit the Kashi Vishwanath temple because of the massive crowds packing the narrow streets leading to the temple. After December 13, when Prime Minister Narendra Modi inaugurates the Kashi Vishwanath corridor—a sprawling construction connecting the temple to the river Ganga—this will no longer be the case. For the devout Hindu, darshan now promises to be an easier, more serene affair, with a level of ease and facilitation they could scarcely have expected earlier. Following the construction of the corridor, which began in 2019, the narrow streets have been replaced by wide avenues. The Kashi Vishwanath temple complex, which formerly occupied an area of 3,000 sq. ft, has now been expanded to a massive 500,000 sq. ft. The corridor also features modern amenities, such as ramps and escalators, to make the journey easier for pilgrims.

In the 2014 Lok Sabha election, Prime Minister Narendra Modi, contesting from Varanasi, had raised this issue, expressing a desire to see the Kashi Vishwanath temple developed on the lines of the Somnath temple in Gujarat. In 2017, after the Yogi Adityanath government was formed in Uttar Pradesh, this plan gained momentum—in April that year, while reviewing the development plans for Varanasi, Chief Minister Adityanath directed government officials to prioritise the construction of the Kashi Vishwanath corridor. To speed up the process, the state cabinet approved the formation of a special area development board to expedite the acquisition of land for the project and for the construction. By March 2019, about 60 per cent of the land needed for the project had been acquired, with Prime Minister Modi laying the foundation stone of the corridor on March 8 that year, a few days before the general election was announced.

Now, by inaugurating the corridor in the runup to the 2022 assembly election in UP, Prime Minister Modi will hope to once again reap political advantage. Kaushal Kishor Mishra, dean of social sciences and professor of political science at the Banaras Hindu University, says, “The Kashi Vishwanath temple attracts a large number of tourists not only from across the country, but also from abroad. People would never have imagined that the temple, which was situated between very narrow streets, would one day be surrounded by a grand corridor. And by inaugurating the corridor just before the UP assembly election, Prime Minister Modi will not only highlight his development agenda, the BJP will also aggressively push the Hindutva agenda by talking about the completion of this project in Varanasi and the commencement of the construction of the Ram temple in Ayodhya.” 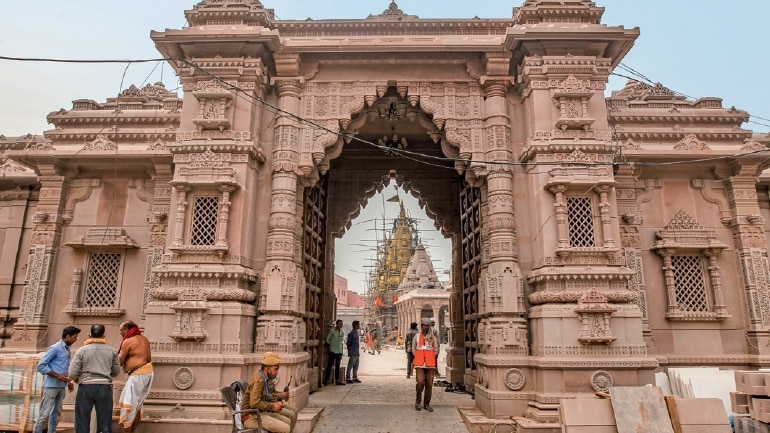 A views of the construction of the Kashi Vishwanath temple corridor; Photo by Anand Singh for India Today

Sources say it was not an easy task to expand the temple complex from its original 3,000 sq. ft area into a grand corridor measuring 500,000 sq. ft. For one, officials identified over 300 buildings that were within the proposed footprint of the corridor and would need to be removed. Deepak Agrawal, who took over as commissioner of Varanasi division in March 2018, and is the chairman of the Shri Kashi Vishwanath Special Area Development Board, played a major role in this process. When it came to these buildings, Agrawal says he had two options—to either acquire these properties and demolish them, or to include them in the corridor through mutual agreement. “314 properties were identified,” he says. “These included privately owned properties, trust properties and assets held by entities which only had custodians.” Another problem was having these properties vacated—more than 100 cases involved properties with different owners and occupants, with the latter being either tenants or encroachers. “In cases where tenants did not have legal documentation for the properties they were occupying for business, a one-time settlement was done on the basis of mutual agreement. Rehabilitation grants between Rs 1 lakh and Rs 10 lakh were paid,” he says. He adds that these grant payments also took into consideration the social status of the people being relocated—widows and members of SC/ ST (scheduled caste/ tribe) communities got higher payments. As a result of such efforts, he says, not a single case of land acquisition has become a dispute pending in court. This effort also saw an example of communal harmony—for the construction of the corridor, about 1,700 sq. ft of land in front of the Gyanvapi Masjid had to be acquired. This land was purchased, with the Anjuman Intezamiya Masjid (AIM, the organisation in charge of the Gyanvapi Masjid) being given 1,000 sq. ft of land in Varanasi’s Bansphatak area.

After the land was acquired, demolition of the existing structures began in 2019. During this process, 61 ancient temples, along with idols of gods and goddesses were recovered. Agrawal says, “When the corridor was being designed, it was thought that the entire complex surrounding the temple would be flattened. The design was changed to incorporate the temples uncovered during the demolition into the corridor. Many buildings, such as the Vedic Centre and the Mumukshu Bhavan, were also relocated.” Of the temples that were uncovered, 27 of the largest are being renovated. A ‘dev gallery (gallery of the gods)’ is also being constructed as part of the corridor, where the remains of the temples and the idols uncovered during the demolition will be preserved.

However, not everyone is happy with the process. Questions have been raised about the demolition of sacred structures in the area. Vishwambhar Nath Mishra, a professor at the Indian Institute of Technology (Banaras Hindu University), Varanasi, says, “The demolition of temples around the Kashi Vishwanath temple for the construction of the corridor has changed the ecosystem of the entire area. The ill effects of this will be seen in the days to come.” Others disagree. Ashutosh Tandon, minister in charge of Varanasi district, says, “The number of temples that have emerged from the buildings around the Kashi Vishwanath temple prove that in ancient times there were many temples in the Baba Vishwanath temple complex, which were later encroached upon. These temples have been protected [by including them in the corridor].”

As a result of this progress, the BJP has begun pushing its cultural agenda. A major facet of this was a multi-city religious procession carried out with a statue of Mata Annapurna that was recently repatriated from Canada to India. This 18th century stone idol had been stolen from Kashi and transported to Canada in 1913, where it was housed at the University of Regina. After the Indian government received information about the statue’s whereabouts, the Centre began diplomatic efforts to have it returned. After it was brought back to the country, on November 11, on the occasion of Gopashtami, it began a journey to Varanasi in a procession that travelled from New Delhi to Varanasi via Ghaziabad, Aligarh, Kanpur, Lucknow and Ayodhya. On November 15, on the occasion of Devotthan Ekadashi, at a function attended by Chief Minister Adityanath, it was installed at the Kashi Vishwanath temple complex.

Kishor Mishra says, “Judging from how processions were carried out in a dozen cities across Uttar Pradesh before the installation of the statue in the Kashi Vishwanath temple, it is clear that before the 2022 assembly election, the BJP will resort to aggressive displays of Hindutva to counter the issues raised by Opposition parties.” The BJP’s Varanasi unit has also been deputed to create buzz about the inauguration of the temple corridor. To ensure sufficient attention on the inauguration ceremony on December 13, the local unit has put together a team involving BJP office bearers, MLAs and ministers. Mahesh Chand Srivastava, the BJP’s Varanasi president, says, “Prasad from the Kashi Vishwanath temple will be carried from village to village. Officials responsible for this have also been given block-wise responsibilities to encourage villagers to visit the temple.”

Questioning the BJP’s effort to get political mileage from the corridor, Omprakash Singh, Samajwadi Party (SP) leader and tourism minister in the previous Akhilesh Yadav government, says, “The Kashi Vishwanath corridor project was begun during the term of the SP government. Five buildings were also purchased. The BJP will not benefit from the construction of the corridor.” One way or another, the true test of the project’s popularity will be the results of the UP assembly election, scheduled for February 2022. ON JUNE 19, 2018: Uttar Pradesh’s Yogi Adityanath government constituted a special area development board for the Kashi Vishwanath temple corridor project, with the commissioner of Varanasi as chairman of the board.

of the project, which would expand the 3,000 sq. ft temple complex into a 500,000 sq. ft area that connects the temple with the river Ganga

THE PROJECT: The master plan was prepared by HCP Design, Planning and Management, the same firm that is responsible for the development of the Central Vista in New Delhi. Construction is being carried out by Ahmedabad-based PSP Projects.

THERE ARE three main parts of the Kashi Vishwanath temple corridor: the temple complex, spread over a rectangular area 73 metres long and 40 metres wide, a temple chowk in the middle, about 5,000 sq. m in size and a pathway connecting the temple chowk to the Ganga ghat

THE REDEVELOPMENT has come at a massive cost—about Rs 390 crore to acquire land, Rs 70 crore on rehabilitation and demolition—and Rs 339 crore on Phase I of construction. Another Rs 66 crore will be spent in Phase II, to build a ramp at Ganga Ghat and a gate and jetty at Lalita Ghat.